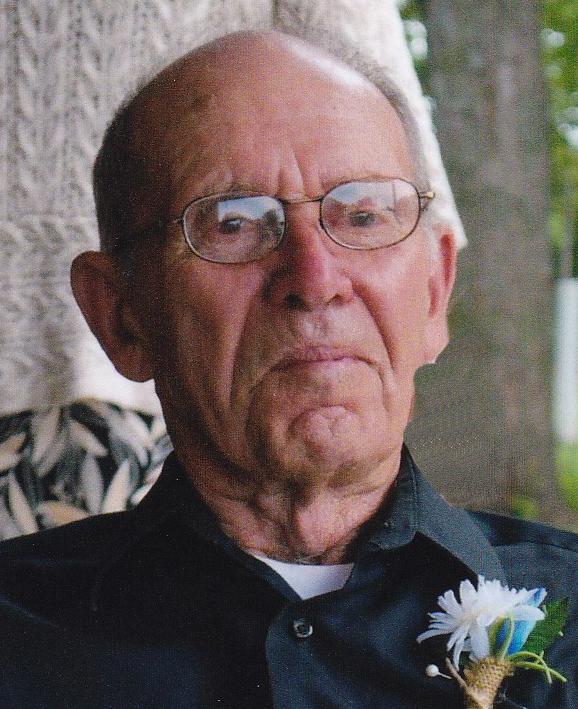 Bruce Eugene Coop, age 94, passed away peacefully at his home in rural Fairfield Friday, June 5, 2020, surrounded by his loving family.

Due to Covid 19 restrictions, there will be A Celebration of Life service at a later date.  A public visitation will be 8:30 a.m. – 4:00 p.m., Thursday, June 11 at Behner Funeral Home Fairfield.  There is no family visitation scheduled.  Bruce will be interred at Antioch Cemetery, Fairfield.  In lieu of flowers, memorials may be made to the Antioch Church or Antioch Cemetery.  Cards and memorials may be sent to Steve Coop at 3091 150th St, Brighton, Iowa  52540.

Bruce was born January 28, 1926, to Raymond and Fern (Godwin) Coop in Jefferson County, Iowa.  He married Margaret Elizabeth (Betty) Simmons (lovingly referred to as ‘Birdie’) June 1, 1948 at Antioch Church, Fairfield, where he was a life-long member.  They were the parents of 6 children.

Bruce was a WWII veteran and served in the Pacific Theater.  He was a life-long resident of Jefferson County, farming north of Fairfield.  He continued to raise cattle until age 87.  He was an avid raccoon hunter and was a good, honest man who loved his wife, of 71 years, his family, and his life of farming and his love of our Lord.  Bruce was a quiet man, of few words, and was liked and respected by all who knew him.

He will be missed by his children Mike Coop of Climax Springs, MO; Steve (Jolaine) Coop of rural Brighton; Marcy (David) Vensel of Bettendorf; Shelia Stanley of Moline, ILL; Lynne (Eric) Leacox of Blue Grass; Russ Coop of rural Fairfield; 13 Grandchildren and 22 Great Grandchildren.  He is survived by his sisters Josephine (Chambers), Packwood; Colee (Hospers), Iowa City; Rose (Hendricks) of Fairfield and numerous nieces and nephews.  He was preceded in death by his wife, in January 2020; his parents and siblings Bernard and Roger Coop, and Sharon (Smith).

On-line condolences may be made to the family at behnerfh.com.